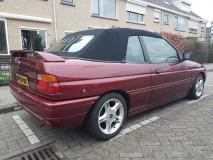 I extensively restored this escort cabrio in 2012 and sold it at the end of 2014 after i bought the 350z roadster!
In 2016 the engine acquired an oil pump problem (fabrication fault in the casting) with its new owner, and a new pump was fitted at a nearby garage (incorrectly) and the car was returned to its owner with no oil pressure at all!
I was contacted, and the car was offered back to me for 0- which i accepted without thinking about it! I stripped the engine down, replaced the main bearings, and big end shells, and not to forget the oil pump, and its running like a dream again! Its not as fast as the Nissans, but its doing ok with its kent cam, with up-rated fuel systeem.
So now you know one of the reasons that the 300zx has been waiting patiently for the past months! I also bought a 1994 RS2000 a few weeks ago for the engine and the mtx gearbox, and not to forget the suspension with rear disc brakes! Car was 250,- so no risks with this one! Engine started first time after standing still for 2 years and only the valves sounded a little noisy, but this one will have to wait a while!